skip to main | skip to sidebar

Bismillah..
I have never actually taken any supplements before, not once after giving birth to Hayfa. Sometimes i would constantly tell myself that my body is okay, i eat healthy food (lah sangat!) And i exercise regularly. But the truth is, i just could not deny how fatigue and tired i get during lunch break and after work!

To the extent that i pity my husband who would suggest eating outside seeing how dull i look. Sometimes i couldnt even put up long enough to play with Hayfa, and i'd end up dozing off first before her!

Until one day a cousin and a friend suggested this product. What mesmerized me initially was how compact this food was, that it contained 1001 nutritional benefits. Of course even a clean eater would not be able to munch in 15 fruits and herbs all in once!

So i tried..and alhamdulillah, the effects were pretty much surprising! I could instantly feel that energy kicking in. My staff would say 'you look so different and bright today'!

So of course after a month consuming, i was determined to become a rania (rakaniaga or business partner) and from the start, i sold at least 10 bottles every week. Not bad for a start.

Okay i'll continue nextweek. Will talk about how people approached me and became enlightened to try the product. 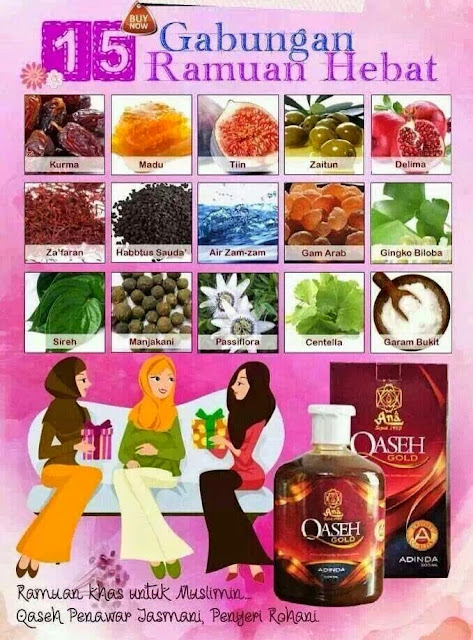 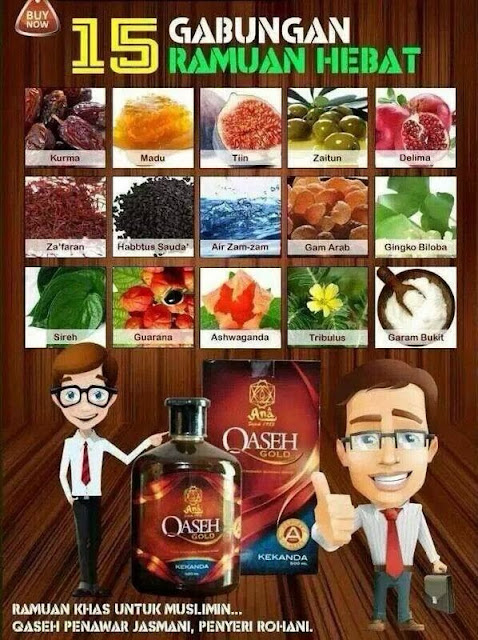 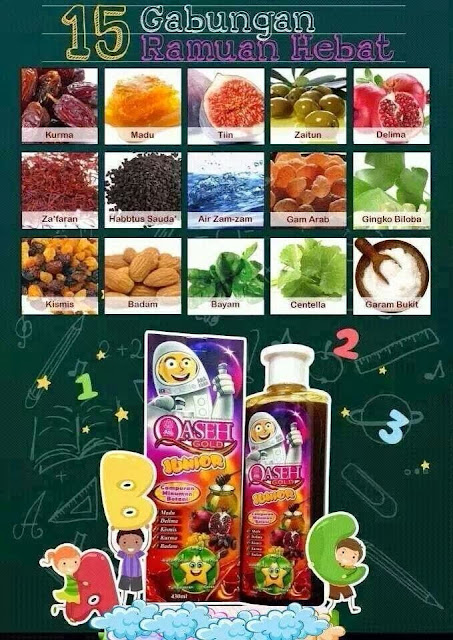 whispered by : sarahss at 8:19 AM No comments: Links to this post

Went to penang yesterday before stopping over to tok's. The last time i visited this island was like, a decade ago? And the traffic my oh my - i reckon kl is less hectic! So yes Hayfa,  you've been to Penang Hill :) 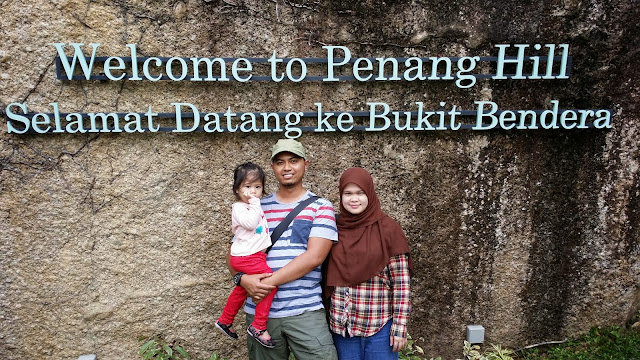 whispered by : sarahss at 6:36 AM No comments: Links to this post

Last fortnight, we had a wee getaway to Singapore. Well it was just USS, to be exact. Stayed 2 nights at Mutiara Hotel JB (which was awesome!) and went to USS via bus (yup, took the package from cuti.my). I felt like I was 5 again!

One good thing about USS was that they had child swap pass, which I think is rather baby-friendly, and yes parents with babies that could't get on the rides do not have to queue twice. So both of us had the chance to ride the 4D transformers ride, twas like we were in the movies! Then papa got on the cyclone roller-coaster, and I had a dino-soar fly with Hayfa. After that it was all Hayfa-friendly rides. We also had a quick tour to the SEA aquarium, which has the largest tank in the world, leaving Hayfa awe struck. 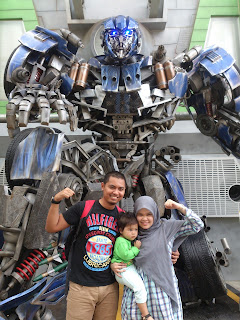 If you ask me would I go back, of course I would! Perhaps with another new member? :)

whispered by : sarahss at 1:45 AM No comments: Links to this post

Testing again
whispered by : sarahss at 1:44 AM No comments: Links to this post

Testing from my bb. Wonder if it works? Let's see..
whispered by : sarahss at 10:11 PM No comments: Links to this post

Assalamualaikum!
I know that it is pretty late for me to actually write my first post of 2013 in May, but oh well better late than never. My wish is that one day my kids could actually read, you know, like a story book of what had happened before they were born, how they were as babies etc. First and foremost alhamdulillah for everything that Allah has granted me. I have just encountered this blogger app and boy tis way cool! Like writing has never been a hastle! One of the major reasons of the large hiatus is because I have rarely used my notebook, and been doing lotsa work with the ipad, but I find that using blog via Safari is a bit hard. Until one day Dr Halina wrote about this app, so here I am!
whispered by : sarahss at 4:21 PM 1 comment: Links to this post

Hayfa is 11 months old today, and she is growing fast - despite the fact that she has no teeth yet! Haha..today's achievement? Well after months of crawling backwards, alhamdulillah she has learned to crawl frontwards! A big achievement for my little sayang! Proud of u laling! Though she did have a bump on the forehead - tersembam sebab salah gostan lol.

And yes alhamdulillah today we have received Hayfa's new SSC! Will upload more pictures of it okay! :) Toodles!
whispered by : sarahss at 5:47 AM No comments: Links to this post

Salam and hi people! Okay so it has looooong been the last time since i did a post (yaaaaaa typical me) however upon stumbling on to Dr Halina's blog yesterday, I figured I just had to right about hayfa's milestones quick! What more with one week leave, it's pretty much a must! Stay tuuuuned people!
whispered by : sarahss at 9:46 PM No comments: Links to this post

And then came me!

This post was supposed to be written by Mama 6 months ago. However she was rather busy, and Papa kept on insisting, so I’m writing this on behalf of them instead.

It all happened on one fine morning when mama suddenly felt a gush of fluid soaking her bed down under. Twas so massive, she just had to go to the bathroom. Gosh clear liquor was leaking out aplenty, non-stop! Thrilled yet nervous, mama woke papa up from his dreams, only to find out that papa was twice as scared!

At first mama was a bit reluctant because the contractions were still mild and irregular, hence she would be admitted as PROM<18H (mama malas nak duduk wad lama-lama sebab hari-hari pergi wad T_T).

So she called the

Dr Aliah was mama’s friend, and a very good doctor, so mama agreed on going early.

Mama, papa, tok abah and tok mama (and me!) arrived at the Obviously there were no other patients, so Dr Aliah attended to mama stat.

So after all the examinations etc, 600am mama was sent to Bed 2, Ward 5E. Tok abah and tok mama went back home first, and papa accompanied mama up to the ward. He also bought mama 2 pieces of roti canai (tiba-tiba mama mengidam roti canai T_T).

Hour by hour the contractions were getting regular and stronger. By 12 noon, they were 2:10:20. Dr Zulida the Specialist oncall made a VE, and it was already 2cm, but the cervix was still thick. She did an S&S (sweep and stretch). Mama was also given ampicillin (even though HVS was negative, Dr Zulida insisted on it as doctors turn out to be one of the major GBS carriers, hence, just to be on the safe side).

The contractions were getting stronger as ever. Mama timed them by herself; it was already 3:10:30. The pain was soooo unbearable, she just had to call the nurse. Dr Norliza the new MO made a VE.

Mama was pushed down to the LR with a very tight face! 1630hrs, Dr Ain the MO oncall made a VE: 4cm it was. Mama was given IM Nubain.

However the contractions were sooooo painful; she just had to sniff Entonox PRN – and mama became sooooo high on entonox! Sampai papa pun takut T_T

Mama agreed, and dad signed the consent, but just as the anesthesiologists were about to explain the procedure what not, the JM in charge VEed; “Dah 7cm lah doktor!”.

In came Dr Liyana the HO oncall (as Dr Ain was rather busy).

The 2nd stage was rather quick. After 4-5 pushes I finally came out. Phew!

Everything was different outside the door. I remembered laying down on mama’s chest, and then they handed me to papa. I heard papa recite the athan, MashaAllah it was beautiful J.

Mama and me were pushed upstairs to Ward 8B Bed 8. Tok mama, tok abah and paksu Ariff were all excited, waiting. After some hugs and kisses, they went back home, leaving papa, mama and me.

The coming day the rest of the family came to see me; Makngah Hani, Makteh Mira, Makcik Nisa, Atok, Opah, Paklong Hussin, Pakngah Hassan, Makngah Min and Maksu Nurul…and many other friends of mama and papa. I felt so blessed J.

Well that was what had happened 6 months ago. Sorry for the humongous hiatus! It was just that, mama said she just has to publish this asap. She wants all of my milestones recorded virtually.

To date, I am trying hard to crawl, which is rather difficult. Everyone is urging me to crawl fast! I could also recognize faces now, and I cry when unfamiliar faces pop in sight. I eat rather a lot, like 2 full bowls of porridge and some Farley’s biscuits per day (I weighed 6.6kg when I was 6 months old, can’t wait to see how much it’d be for the next check up!). Mummy has already taught me to sleep in my own bed J And yes I think I could understand adult language now, haha!

May Allah bless mama and papa and everyone around me ^___^ 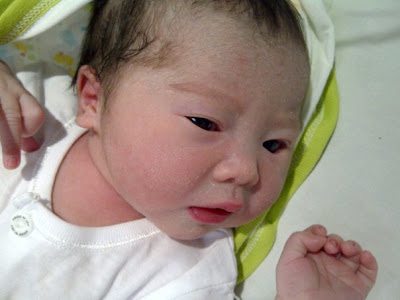 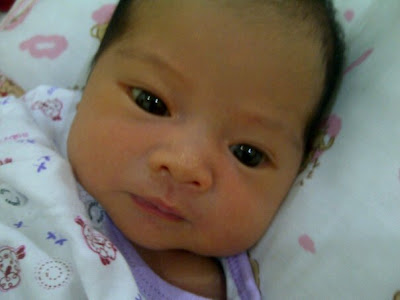 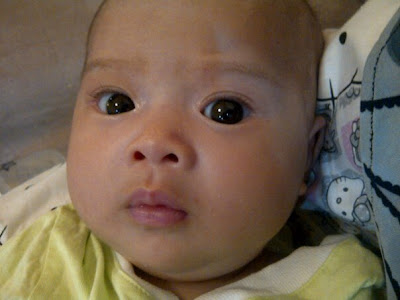 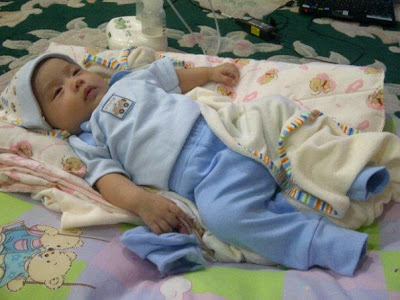 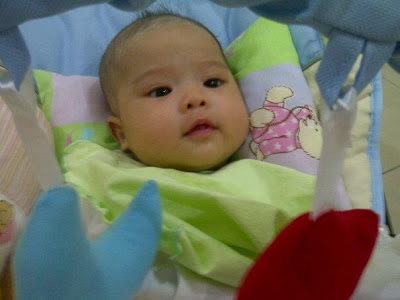 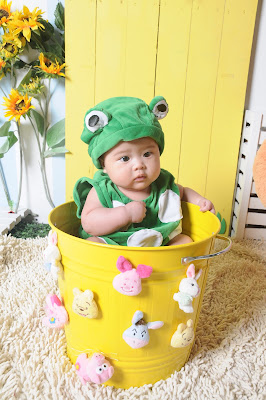 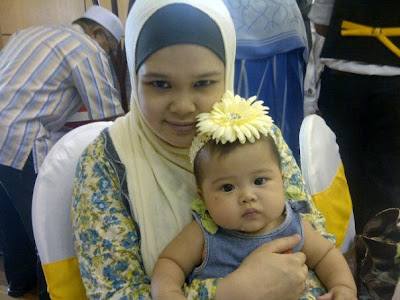 Alhamdulillah. Yesterday two great news came dangling in altogether. Thank You Allah for your endless blessings. Just couldn't be more thankful. =)
To cut things short, we have been posted to Hospital Serdang (smile!). Hubby is now tagging along in Medical Department, and wifey is posted to Orthopedics. InshaAllah the best departments for us to start internship.
Another news is...well let's just hold it for a while, shall we? Save the best for the last *wink*wink*
whispered by : sarahss at 2:55 AM 6 comments: Links to this post 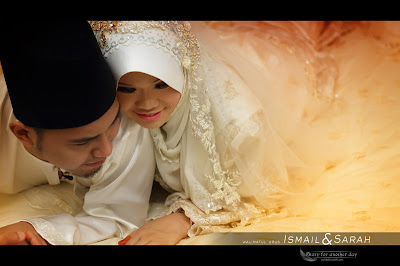 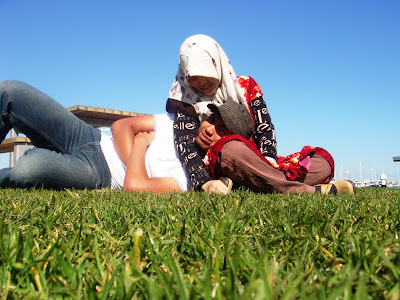 Salam.
I know this post is rather late for such an announcement, but this is it:
I AM HAPPILY MARRIED =)
The wedding went well alhamdulillah, and we had a fabulous honeymoon in Perth =).
Sekarang tengah kumpul duit untuk tunaikan haji pula.
We're done with the SPA interview, and are currently waiting for the induction call. Should be sometime after raya inshaAllah. Yup been pretty nervous to face the two years of total suffering, but being jobless is no good either.
Doakan segalanya berjalan lancar.
Come, let's seek for the auspicious night of Lailatul Qadr! =)
whispered by : sarahss at 8:55 AM No comments: Links to this post

The Girl Next Door

sarahss
Bandar Baru Bangi, Selangor, Malaysia
A pathologist-wannabe who wishes to travel the world. Wife of MIH, mummy of Hayfa, daughter of 2, sister of 5, and a servant of HIM.

Beat of the moment

ponder of the day

And He has set up on the earth mountains standing firm; lest it should shake with you; and rivers and roads; that ye may guide yourselves. (Qur'an 16:15)

Islam - The Way Of Life